Mad River Glen first cranked up its now famous Single Chair on Dec. 11, 1948. Roland Palmedo, the mountain’s founder, had built the Single Chair at Stowe in 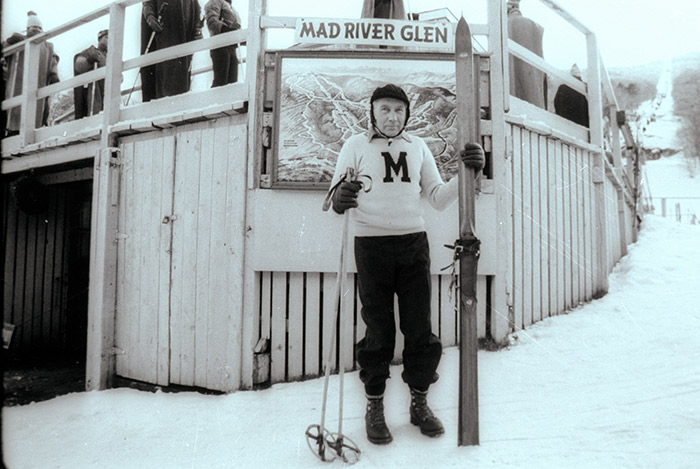 the 1930s. Early on in Stowe’s skiing history, he became disenchanted with vying commercial interests there and became committed to developing a new ski area where sport, not profit, would be the objective.

Palmedo, a Navy pilot that served in both World Wars I and II, took to his plane and scoured the Green Mountains for the perfect location to start his new venture. After carefully considering various options that included Killington Peak, Mount Abraham and Mount Ellen, he settled on the relatively diminutive General Stark Mountain. He selected it because of the trail and terrain potential, its northern exposure, the abundance of snow, and that it resided entirely on private land. He purchased over 700 acres from the Ward Lumber Company and began work toward fulfilling his dream.

Palmedo believed that “a ski area is not just a place of business, a mountain amusement park, as it were. Instead, it is a winter community whose members, both skiers and area personnel, are dedicated to the enjoyment of the sport.” Mad River Glen developed over the years with this vision of community as its foundation. He also believed in working with nature and not against it. “Only by walking up, down and across the mountainous bowl Palmedo chose for Mad River Glen could he feel, sense, see where and how the trails should be cut to fully utilize the terrain’s contour thereby providing the best possible fall-line skiing experience,” as Mary Kerr describes Palmedo’s trail building philosophy in her tome, “Mad River Glen. A Mountain Love Affair.”

He engaged the American Steel & Wire Company to build a state-of-the-art Single Chair which, at the time, was the fastest in the world. The mountain opened for the 1949 season with a network of five trails. Mad River Glen was considered a “top shelf” ski area that went toe-to-toe competing with New England’s best known early ski operations. Over the ensuing decades the new Sunnyside Double Chair was added in 1961 along with its gentle terrain, followed by the Birdland novice area in 1967, and the Practice Slope Chair in 1971. As the ski industry changed with the advent of snowmaking and increased grooming, Mad River Glen remained relatively untouched by time. This was due mostly to the fact that there was precious little water for snowmaking and the steep, raw terrain did not lend itself towards more grooming.

In 1972, a group led by Truxton Pratt purchased Mad River Glen with his wife, Betsy, taking controlling interest of the Mad River Corporation upon his death in 1975. Over time and in many ways, Mad River became a skiing backwater, year after year became increasingly unique in the ski industry. Betsy Pratt worked hard to maintain Palmedo’s vision and stewarded Mad River Glen by protecting it from the many changes in the ski industry. When Pratt decided to sell the ski area, she wanted to sell it to the only people she felt she could trust: Mad River Glen’s loyal skiers. After several failed attempts she stumbled upon the idea of creating a cooperative ownership structure to achieve her goal.

When Mad River Glen was purchased “by the skiers,” the future success of the endeavor was certainly not a foregone conclusion. The co-op has achieved remarkable results: paying off the original mortgage, growing the community, creating a shared mission and vision, solidifying the business model and finances and most importantly, reinvesting nearly $5 million in the mountain’s infrastructure. These re-investments include catching up on years of deferred maintenance, replacing key components of the Sunnyside Double, hours upon hours of on-mountain trail work largely cut by hand, and the historic restoration of the iconic Single Chair

This project represents the embodiment of the Mad River Glen spirit. When faced with the question of what to do with it aging Single Chair more than 80 percent of the co-op shareholders opted to spend a premium to restore the iconic lift and retain the existing uphill capacity rather than build a more modern and less expensive double chair (or, heaven forbid, a quad!). Not only did the co-op make this bold decision but they also embarked on a never-before conceived campaign to raise money for the project. Partnering with the Stark Mountain Foundation and the Preservation Trust of Vermont the Mad River Glen community raised the entire $1.8 million price tag for the project through donations.

While the co-op has certainly been a tremendous success there are environmental and economic challenges that will always require thoughtful consideration. The Mad River Glen Cooperative is an amazing and unique organization that will find a way, the “Mad River Way,” to ensure its future.

Today, Mad River Glen is the only ski area in the nation on the National Register of Historic Places. It has more than 1,800 individual skier-owners who have purchased more than 2,200 shares. Unlike other ski areas, Mad River’s goal is to maintain and preserve the experience rather than to overhaul or upgrade it. Both the skier-owners and the management understand that skiers come to Mad River for the unique combination of legendary terrain, sense of community, low skier density, and intimate atmosphere. Ski it if you can!

The best place to learn more about Mad River’s past is by checking out our amazing coffee table-style history book “A Mountain Love Affair – The Mad River Glen Story” – Available at the Mad River Glen General Store. Author, Mary Kerr not only chronicles the history of one of the most beloved and hallowed ski areas in America, she also captures its true essence. Using extensive interviews, primary source materials, and 25 years of first-hand knowledge she weaves an incredibly compelling tale. This full color, hard cover is available at the General Store. You can also watch Spirit of a Classic – The Story of Mad River Glen.

MAD RIVER GLEN THROUGH THE YEARS

1951-52: Father and Son Race moves to MRG from Stowe and evolves into the Family Tournament.

1954-55: Practice Hill Rope Tow is installed. MRG hosts the NCAA Downhill Championship Race. 68 new chairs are added to the 65 already on the Single Chair’s line more than doubling the capacity of the lift.

1957-58: McCullough Turnpike (current Route 17), the road over the mountain is finally completed.

1958-59: New tower (2) is added at the bottom of the Single Chair. Beaver trail is cut. T-Bar goes in on the Practice Slope. Sugarbush Valley ski area opens.

1984:  “Ski It If You Can” Bumper Sticker introduced – Check out the whole story!

1995-96: Mad River Glen Cooperative purchases mountain on December 5, 1995 and the mountain opens with a ceremony at the Single Chair on December 7.

1997-98: The Ice Storm of 1998 hits Mad River Glen, causing a great deal of damage to the mid-mountain forest. Clean-up crews and volunteers have the mountain re-opened within a week.

2000-01: Callie’s Corner Handle Tow Area is added and Stark’s Nest is renovated. Over 325 inches of snow allows skiing to continue until April 29, 2001, the area’s latest closing date on record.

2005-06: The Mad River Glen Cooperative celebrates 10 years of skier ownership of the mountain.

2006-07: On Easter Sunday, April 8, the original Single Chair brought its last skiers to the top of Gen. Stark Mountain. The last rider was long-time Mad River Glen GM, Ken Quackenbush. Fittingly the Single Chair was ushered out of service in a snowstorm that ended the season in a fabulous powder day.

2010: Mad River Glen submits an application to be included in the National Register of Historic Places.

2020: Base area renovation project breaks ground on a new Ski School/Patrol building providing increased room for ski school instructors and ski patrol while improving medical services for our guests. Extensive renovations were made to the northeast corner of the Basebox with the goal of adding increased space for ski school programs, providing bathrooms on the main floor, improving traffic flow, increasing bag storage, making the building handicapped accessible with a new elevator, increasing energy efficiency, and providing safer and more efficient food and beverage operations.

New England Lost Ski Area’s Project – So Cool! Priceless skiing history of ski areas that are no longer with us.

Sugarbush Resort History – A brief outline of the History of Sugarbush, our little sister to the south.