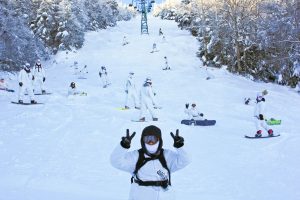 In an effort to preserve the mountain’s unique character the shareholders of the Mad River Glen Cooperative have opted to not permit snowboarding at Mad River Glen. We are well aware that this policy is quite uncommon and we strive to make sure that people are aware of the policy prior to visiting.

Mad River Glen is one of only three ski areas in North America that do not permit snowboarding, the others being Alta and Deer Valley in Utah.  Many people don’t realize that Mad River actually did allow snowboards very early on in snowboarding history beginning in 1986. Betsy Pratt, Mad River Glen’s owner at the time, was friendly to snowboarders but ran into safety issues on Mad River Glen’s main lift, a 1948 Single Chair. After that snowboards were restricted from the Single and then, after a legendary confrontations between Betsy and some local riders, she decided to ban snowboards entirely beginning with the 1991-92 season. When the Co-op took over the mountain in 1995, the shareholders voted on the issue with more than 75% voting to maintain the snowboarding ban. There has never been another vote since.

We want to make clear that there is no animosity towards snowboarders per se. The ski industry is very competitive and our Co-op owners believe that the snowboarding policy is the best course for the mountain. According to the Co-op’s By-Laws the only way the policy can change is if a two-thirds majority of the shareholders vote to change it.