What is 26 you might ask? Well, it’s  General Stark Mountain’s place on the list of Vermont’s highest peaks. There are a bunch that are higher but hardly any pack The General’s punch. Heck at 3,662′ it doesn’t even make New England’s top 100. Stark Mountain’s peak elevation is often debated, but here are the facts; The 3,662′ elevation is the actual peak (located south of Antelope). The top of the rise behind the Stark’s Nest is 3,644′. We use 3,637 as the elevation of the top of the Single Chair. Our vertical drop of 2,036′ is calculated from that with our base elevation of 1,600′.  As an aside, if you hike north on the Long Trail from the top of Appalachian Gap you will find Baby Stark Mountain (elevation of 2,863′) and then Molly Stark Mountain (elevation 2,967′)Who knew? Now you know. 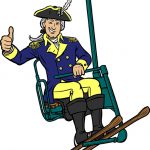