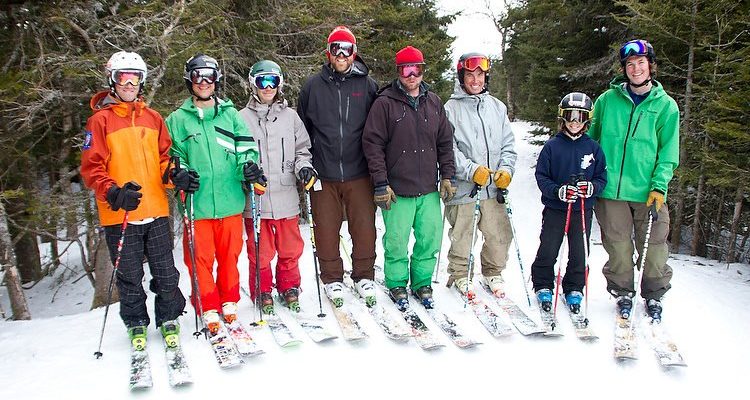 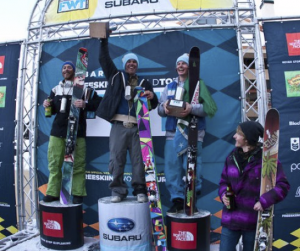 The Mad River Glen Freeski Team has established itself as one of the preeminent freeskiing programs in the nation.  MRGFT alumnae have gone on to compete on the Freeride World Tour and have, to put it mildly, performed pretty darn well. The highlight to date was certainly in 2011 at the US Extremes when MRG skiers swept the podium. ESPN commented, “Maybe it shouldn’t seem as surprising as it did. After all, Vermont’s Mad River Glen is a hard place to ski. But still. Three kids from the same Vermont ski area monopolizing the podium at the vaunted Crested Butte Extremes, the holiest of big-mountain ski competitions?”

Rest assured that the MRG Freeski Team is not resting on its laurels. Program director, Ry Young, who also grew up on skiing the slopes of Gen. Stark Mountain, notes that the talent pool at Mad River is ridiculously deep. “We don’t re-build our team as kids age out we simply re-load”, adding “What we have going for us is tremendous terrain and an amazingly talented group of young skiers that constantly push one another to the next level.” 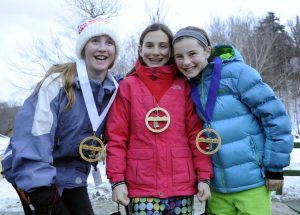 The Mad River Glen Freeski Team is designed for skiers ages 10 to 18 (as of January 1st) who want to improve their all-mountain skiing, bringing their talents to the next level. Team members will work daily on bumps, jumps, steeps, cliffs and trees in various snow conditions. The team also has a strong focus on mental skills development such as goal setting, teamwork, concentration, perseverance, and sportsmanship.

Prospective athletes who have otherwise not previously been part of the Mad River Glen Freeski Team, must pass an on-mountain skills assessment. In order to ski with the Freeski program athletes have to be skiing in a dynamic parallel on ALL terrain. Athletes must be able to ski all of Mad River Glen’s terrain safely and confidently, they must also be able to self-arrest and recover their own gear after a fall. This group needs to be self sufficient; they need to be able to get lunch on their own, go to the bathroom alone, and be able to find their parents on their own after training. Freeski Team athletes must be able to ride all lifts (including the Single Chair) without an adult. Extended season training and travel to competitions will require athletes to be self sufficient and posses the ability to manage their time effectively. 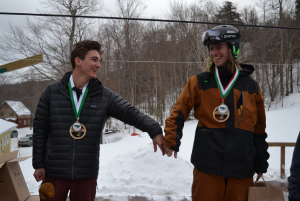 Extended season training is available from December 14th through mid April for those athletes who wish to compete in IFSA sanctioned Freeski events. The extended training will cover coaching both at home and away at competitions on Saturdays and Sundays throughout the season running through NORAMS in April.

Competitive athletes are expected to participate in at least 5 IFSA sanctioned competitions during the season, 2 National events and 3 Regional events. In order to compete, athletes must have an IFSA membership. Program fees do not include IFSA membership, competition registration fees, additional lift tickets, lodging, and transportation costs.

(Note – Competitive athletes can choose the competitions they want to participate in but are expected to compete in at least 5 IFSA events – 2 Nationals and 3 Regionals.  Athletes can register for a maximum of 3 IFSA National events. Athletes can register and compete in all IFSA Regional events, only the first 3 IFSA Regional events count toward ranking. North American Championship (NORAMS) invitations are based on a sum of the best 2 Nationals plus the best 2 of the first 3 Regionals.)

NOT Included in the program fee: MRG season pass, IFSA membership (required for competition), competition fees, lift tickets, lodging, and transportation costs related to competitions. The costs for coaches’ travel and lodging for competitions outside of New England (e.g. NORAMS) will be split among the athletes who are traveling to the competition. 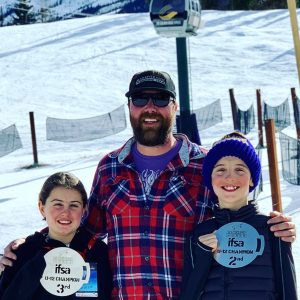 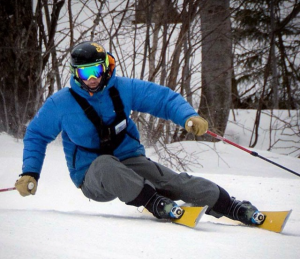 Andy grew up skiing at Cochran’s and then Mad River Glen. He has been coaching the freeski team since 2004. In 2009 Andy spent a season coaching the Jackson Hole Ski Club Freeride Team and in 2010 he spent the season freeskiing in Switzerland. He also coaches the boys’ soccer and alpine race teams at South Burlington High School. Competitively, Andy has won both the Mad River Glen Triple Crown Unconventional Terrain Competition and the Sugarbush Castlerock Extreme, He has been featured in Powder, Ski, Skiing, Backcountry, and other publications as well as Ski The East’s film “Prime Cut”. He has been Head Judge for the Ski The East Freeride Tour and currently holds PSIA Level 1, IFSA L100, and IFSA Judging certifications. His coaching philosophy centers on helping athletes focus on all turns in all conditions so they are prepared to express themselves in the mountains for a lifetime of skiing. Andy lives in Hinesburg, VT with his wife (and former coach) Cristin, their daughter Ellie, and dog Lucy. 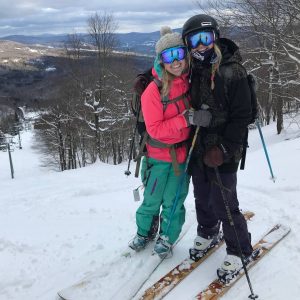 Emily grew up skiing at Mad River Glen with her family and later went on to college at the University of Vermont where she joined the UVM Freestyle Ski Team. During her time with the UVM Freestyle Team Emily learned how to ski park and competed in slope style. In June 2007 Emily traveled out West for the first time to train at Freestyle ski camp on Mt. Hood, Oregon. After graduating from UVM in 2010 Emily moved out to Lake Tahoe, CA and became a coach for the Squaw Valley Free Team. During her time with the Squaw team Emily coached athletes ages 8-17 with a focus of working with the female athletes. Emily started coaching the Big Mountain competitive athletes and spent a few seasons traveling the West Coast competitive circuit coaching the team at the various IFSA competitions. In 2016 Emily moved back to Vermont and by the winter of 2018 she began coaching with the Mad River Freeski Team. Emily says, “Skiing is my passion and I love coaching competitive and determined athletes with a similar love for skiing!” 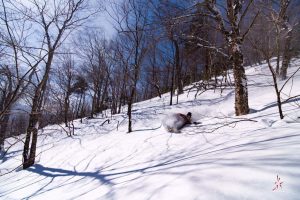 José grew up skiing at Mad River Glen, learning from friends and family he cut his teeth on the slopes of General Stark Mountain from a young age. In 2014 José joined the coaching staff of the Freeski Team. José competed in Ski The East Freeride Tour events since its inception; many of those same events are now part of the IFSA competition circuit. In 2019 José placed 2nd at the Ryan Hawks Memorial Freeride World Qualifier event held here at Mad River Glen. José currently holds his Level 200 IFSA coaching certificate and travels with the team to IFSA events throughout New England and across the country. Jose’s coaching goals include showing young skiers of all levels what they are capable of learning and accomplishing on snow. Skiing, coaching and competing are his passions and José is proud to call Mad River Glen his home mountain. José lives in Waitsfield with his girlfriend Larissa and their two dogs Paco and Viper. 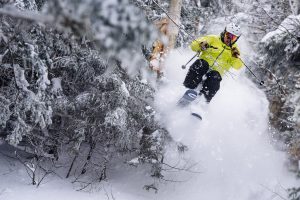 Carson grew up in Hinesburg, Vermont and started skiing at Stowe from the ripe old age of 18 months. Until the age of 4 Carson cut his teeth on the flanks of Mount Mansfield when his father (Terry Barbour) accepted the Ski School Director’s position at Mad River Glen. Since then Carson has spent the last 18 years calling Mad River Glen his home. Carson worked his way up through the ranks of the MRG ski school before becoming a Freeski Team coach in 2016. Carson spent a couple years competing on the Ski The East Freeride Tour and found himself on the podium several times. He also competed in the MRG Triple Crown, one year winning the overall Junior Triple Crown. Carson featured in a short segment of Bobby Brown and MSP Films “Fade to Winter” Film from 2016 as well as a few Ski the East Films and Web Shorts. Carson’s coaching philosophy is focused around helping young athletes ski smoother and more efficiently, creating a more fun and freeing ski experience in any conditions. Carson is currently in his Sophomore year at The University of Vermont where he’s studying to become a Mechanical Engineer.

Please see the FAQs at the bottom of this page for detailed information regarding Freeski equipment requirements, U12 skills assessment, and other common questions.

What equipment is required for a Freeski Team athlete?

Freeski Team athletes are required to wear a helmet and goggles at all times, a back protector and mouth guard are highly recommended but not required.  Freeski Team athletes need to have at least one pair of all mountain skis.  Check with program director Ry Young (802-496-3551 ext 121 or ry@madriverglen.com) for recommendations.

How do I get involved with Freeski competitions?

Stepping into a start gate can be intimidating in any sport, fortunately for freeskiers the competition lies between the athlete and the mountain which breeds a special camaraderie. With a host of IFSA sanctioned events both locally and throughout New England freeskiers are offered a host of opportunities to get involved. We strongly encourage those who are interested in trying competitive freeskiing for the first time to register for one of our home events here at MRG. The IFSA also encourages first timers to drop in by offering a one-time membership, this can be upgrade to a full membership later if desired. For more information on the IFSA and first time memberships click here.

MRG Freeski Team in the media: