A Season’s Story
By Justin Chapman

All good stories follow an arc from beginning to end. There’s setting and drama, good guys and bad, conflict and resolution. A ski season can be said to follow the same pattern. At Mad River Glen, we have Stark Mountain and the perennial question of snow. Its arrival is inevitable of course, but when and how the mountain opens and the winter’s see-saw of drama plays out differently from year to year. So here’s my attempt at the 17/18 season narrative. As with any story, it’s filtered through the teller’s subjective perception. I’m sure others might see it differently, but here’s my version such as it is — I’ll go ahead and run it up the flagpole to see if anyone salutes it.

I like to think of the start of the ski season with the first snows, which usually arrive in mid October. So I’ve included October her in the SparkNotes summary version of the MRG season:

Thank goodness there is NOAA to keep track of average yearly snowfall, and the weather jocks at BTV are pretty awesome in their enthusiasm for snow. Below you should notice the early jump in December, the mid-season slump, and the March boost. That’s pretty much the story of the season: the promise, the meh, and then the dramatic comeback.

If we look at data that UVM collects from the fabled Mt. Mansfield snow depth stake, we see a very similar pattern. Keep in mind that there’s about 4,000’ separating BTV and the Mansfield stake. Though there will be many fluctuations in a 30 day period, the numbers represent the total, more or less, at at the end of each month:

By contrast, the old stake atop Stark Mountain (currently residing/recuperating in the Stark’s Nest) would, in years past, often show about half (or slightly better) the depth on Mighty Mansfield. Why? Probably a combination of latitude, topography, orography, and weather patterns. Whatever the reason, the Northern Greens tend to pick up more snow north of Route 2, with coastal storms and some lake effect snow offering the exceptions in the southern two thirds of the state. So this is my best guess. Stark Mountain monthly totals went (maybe) as follows:

Again, snowfall data (and guesses) support the general trend for most of Vermont: an excellent start, a bit of a blasé middle, and a stunning spring comeback.

In fact, Mad River was down for the count. The ref was ticking them off, dropping his arm to the mat with each number he called: “6… 7… 8…!” And just at the last second, the mighty General staggered back to his feet, put his dukes up, and got back into the fray. Maybe boxing isn’t the best metaphor, but we sure took it on the chin in February.

Nobody likes to talk about the warm-ups, but they’re a natural part of any season story, the dastardly villain if you will. Season 17/18 saw two big ones, one of them historic. On January 12, the temp on Stark Mountain climbed to an incredible 59 degrees. 48 hours-plus of southerly winds, heavy liquid snow, and tropical temps made for rivers running over the snowpack and various blowouts at crucial drainage junctions. Miraculously, the heroes of our story, Mountain Ops, had the hill put back together and serviceable by the following day thanks to temps rebounding to normal and a little styrofoamy dust to cap it off.  If not for a strong December start, the hill may not have survived that heavyweight blow. The season lumbered on with “frozen granular” and a lot of blue ice rollers into February.

February began on a promising note, with little snows building up the snowpack here and there. By the second week of February, finally the woods were looking good, and the backcountry was officially safe and open. Better late than never, they say. And then, as villains will do, he-who-shall-not-be-named made a second appearance; a second meltdown appeared at the beginning of the fourth act. With the exception of Addison County, most of Vermont’s schools take a mid-winter break during the last week of February. Just prior, MRG took another hit, and the ski area closed. Staff was on notice, and I had one morbid conversation with a Able Patroller Maria where we essentially exchanged “see you next seasons.” The General was down for the count again. 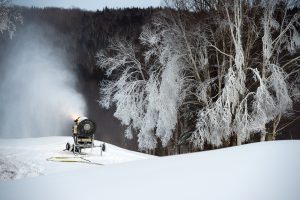 But, with a steady hand on the tiller, the Front Office Captain did not blink in the face of catastrophe. I’d reckon that there was a 2-3” pasting of the hill that essentially saved the season. It was juuust enough of the perfect kind of heavy, wet snow for Ops to till up a stripe, a patch of corduroy, a life-line connecting the first part of the season to what would, within a week, become a spectacular rebound.  In my journal, I note skiing corn on a closed Cat Bowl and referring to “corn-duroy” on the first of March.

Ah March. Thank goodness for March showing up — just like Han Solo taking out Darth Vader when Luke is about to shoot the torpedo to blow up the Death Star (or something like that). In the Northern Greens, we saw a series of three successive coastal storms swing close enough to give us “significant” accumulating snow. The first one was overhyped. It’s always funny to me when 10” is disappointing (to some). Northern VT school kids monitoring their “snow day calculators” were surely disappointed. And so maybe that’s why expectations were low for the second such coastal low (AKA nor’easter) that swirled our way: The Pi Day Storm on 3/14. And boy was it awesome! Eric later referred to this as a 400K dollar snowfall, a huge relief for the Co-op. And for us skiers it was a euphoric release. Hoots and and hollers echoed all over the mountain for days. And then we got a third shot, not quite as big as the second, but a welcome pile-on. March was finished off with some spring weather that we really wouldn’t see much of in April.

The plot-line for April: more snow and cold than usual. Sure, some were bummed by the dearth of corn, but really 17/18 became the season that would not quit – 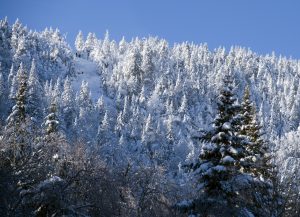 even after the lifts started turning. While the fabled corn horn came out in March, it was not to be in April. Fools’ Day fell on Easter (or is that the other way around?), and the faithful came out for the festivities. The snow was durable, and the snowpack, well, was better than your average patch-to-patch closing days, though noticeably louder than we tend to like in April. The River held tight for another week, and closing weekend saw freezing temps and… snow. Yes, it snowed on closing day. Perhaps more incredible, the coverage was virtually wall-to-wall. While the Front Office held on to the prospect of one more corny weekend, it was not to be, and Mad River Glen officially called it a season.  Story over.

Or was it? Many stories include an afterword, and this one is no exception. Much later in the spring than usual, many of the General’s minions are still hiking up the hill. My most recent day there was Saturday the 21st, and we skied powder! Yes, the season will just not quit. “Mud season”, by contrast, was virtually non-existent, maybe because of the long, slow warm-up. Perfect sugaring temp-cycles lasted well into the third week of april: 20s overnight and 40s or 50s in the daytime. Savvy VT skiers know that when the sugaring is good, so is the corn. And so, without the official horn to signal it, many Mad skiers took the hill anyway to harvest the bounty.

Alas, all stories must to come to a close. But the same characters, along with the inevitable introduction of new ones, will be back for next year’s installment in the series. So stay tuned for another page-turner!

Justin Chapman, an avid MRG skier, English teacher and writer who lives with his wife and two girls over on the other side of the hill in Huntington, VT