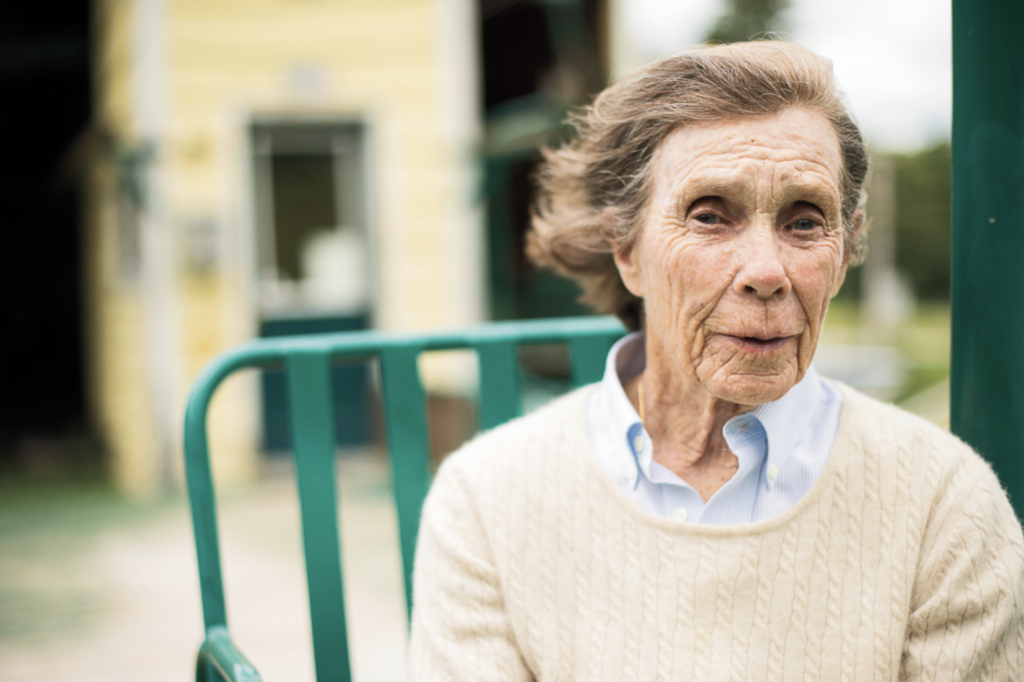 On September 24th, Betsy Pratt was inducted into the Hall of Fame at the Vermont Ski and Snowboard Museum. Accepting the award on her behalf were her children Trux, Elizabeth and Polly as Betsy was unable to attend the induction ceremony in person. Betsy, the former owner of Mad River Glen was a pioneer in the industry and rose to iconic stature for her sharp business acumen and eccentric personality. Without her stewardship and progressive thinking, Mad River Glen would not be the place that it is today. Congratulations Betsy!

Betsy Pratt grew up in Greenwich, Connecticut. After attending Vassar College, she moved to New York City and worked for the Ford Foundation. Her sister, Sally, talked her into coming to Mad River Glen for a ski weekend in 1954. There she met Trux Pratt, who was a member of the Montclair Ski Club. They soon married, buying a ski house in North Fayston on their honeymoon.

Mad River Glen was founded in 1947 by Roland Palmedo, who had previously developed Stowe. “I would like to see Vermont ski areas stay as simple and as rustic as possible. I don’t think we need to import a lot of plush and sophisticated gimmicks. I am suspicious of man’s effort to improve nature. I can’t see that ski resorts need belly dancers, discotheques and other side-show attractions,” said Palmedo. He and trail designer and long-time General Manager Ken Quackenbush developed Mad River Glen to be less commercial than Stowe: a skier’s mountain, with trails designed to follow the natural contours of the mountain.

In 1972, Roland sold Mad River Glen to a group of investment bankers and skiers led by Trux Pratt and Brad Swett. Unfortunately, when Trux passed away in 1975, the ski industry was going through tumultuous times. Betsy took the reins at Mad River Glen, carefully guiding the mountain to preserve its unique character. Rather than bulldoze the terrain and coat the mountain with artificial snow, as most Eastern ski areas had done by the 1980s, Betsy fought to preserve and protect the mountain in its original state. “You just don’t improve on nature, in my opinion,” says Pratt, who now spends her time in North Carolina. “If someone is going to be here in hundreds of years, it doesn’t seem fair for us to rip everything up.”

She and marketing expert and MRG skier, Gerry Muro, developed the “Mad River Glen, Ski it if You Can” marketing campaign. The red and white bumper stickers turned Mad River Glen into one of the most recognizable brands in the ski industry. The plain meaning of the slogan was, “ski it when there’s snow,” but many also read it as a competition (ski it if you’re good enough), or a bucket list item (ski it if you get the chance).

Mad River Glen flourished. By this time, Betsy had also purchased the Mad River Barn, just down the hill from the ski area. Her next challenge was transferring ownership of Mad River Glen to a new generation who would also appreciate and expand on the mountain’s conservationist ethos. She did this by selling skiers on the idea of the first and only cooperatively owned ski area in the country. She talked about it everywhere: in the lift line, on the chair lift, in the Basebox lodge, and even at the grocery store. In 1995, Les Otten, who’d just started building his resort empire with the American Skiing Company, made Betsy an offer to buy Mad River Glen. As legend has it, when Les approached Betsy at the bar, she took a drag off her big corncob pipe, blew the smoke in his face, and told him where he could stick the check. Then she sold the mountain to the skiers for half the price and financed it interest-free until she sold enough shares. The transfer of the mountain to the Co-op was completed in 1995.

Betsy continued running the Mad River Barn and being Mad River Glen’s biggest cheerleader until she retired in 2012, when she moved to North Carolina. Today, she still enjoys watching hikers, snowshoers, and skiers on Mad River Glen’s live webcams.