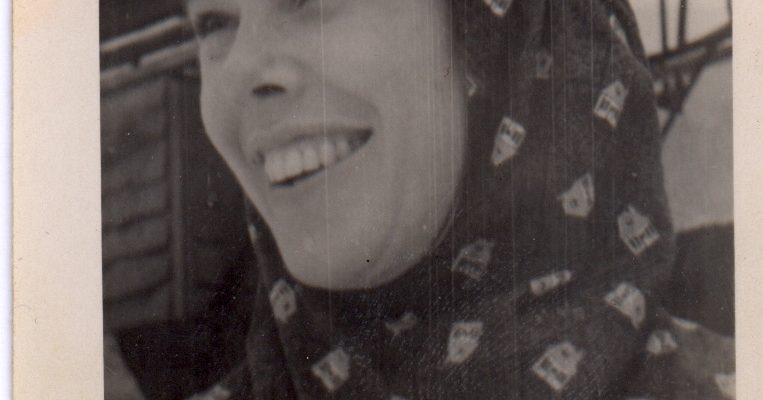 Betsy Pratt To Be Honored On Green & Gold Weekend 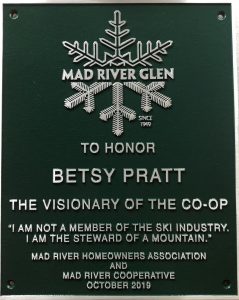 As we head into another ski season the Mad River Glen Cooperative is taking time to reflect on its past and honor an individual that was essential to Mad River Glen attaining the lofty status that it holds within the ski world today.

Betsy Pratt has been called a maverick by some and that’s probably true, but she has far more depth than that. She was a lone woman-owner amidst an uber-male dominated industry in an era that many young women today couldn’t imagine. She successfully guided the mountain for over two decades and then had the vision and drive to chart a new path for Mad River Glen’s future. It was Betsy who came up with the concept of selling the mountain to its most loyal supporters, Mad River’s skiers. Nearly 25 years later we look back and see with 20/20 hindsight how much of a visionary she truly is. 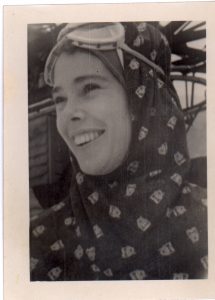 Betsy Pratt first came to Mad River Glen as a college student while attending Vassar College.  On her weekend forays to the Green Mountains she met a fellow skier named Truxton Pratt and they eventually married. They were friendly with Mad River Glen founder Roland Palmedo and eventually purchased a stake in the mountain in 1972. After Trux’s passing in 1975 Betsy solidified her position and became the majority stockholder of the Mad River Corporation.

Betsy’s vision of Mad River Glen was consistent with Roland’s. She resisted her former business partners plan to alter the mountain and further develop the real estate potential. On the contrary, Betsy considered herself a steward of the mountain and dedicated herself to maintaining Roland’s vision. She always saw Mad River as a place that offered a challenging, outdoor adventure in a pristine, natural setting.  A place with an ethos that developed organically with a firm foundation based on the fact that love for the sport outweighed financial considerations. She was always concerned about keeping Mad River in its natural state as much as possible. 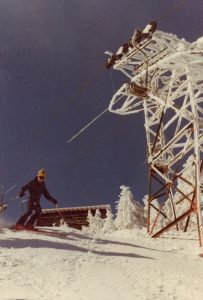 Betsy wasn’t only a steward of the land she also cared deeply about her staff that she treated very much like family.  She considered them essential members of a mountain community that was made up of native Vermonters and visiting skiers.

At a time when the ski industry was rapidly consolidating Betsy Pratt bucked the trend and sold her mountain to the only people she trusted enough to maintain its spirit, Mad River Glen’s skiers. The entire Mad River Glen community owes a tremendous debt to Betsy for her commitment, conviction and belief in all the facets of the Mad River Glen experience that combine to create the incredible sense of place that it exudes.

There are lots of great stories about Betsy Pratt and some of them are even true. Surely many of them will come up over the upcoming Green & Gold Weekend. We hope that future generations of young skiers will learn about Betsy and what she has meant to our community and what she will continue to mean for years to come. 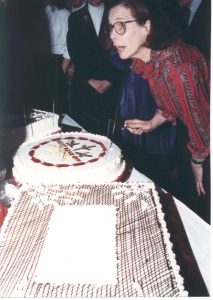 Today the skiers of the Mad River Glen Cooperative are the stewards of our mountain.  Betsy passed that responsibility onto us.  It is fitting that a plaque honoring Betsy will hang right across from Roland’s at the entrance to the Basebox.  Coming generations should keep Roland’s and Betsy’s vision and commitment to stewardship in mind as they forge Mad River Glen’s future.

Over Green & Gold Weekend, Mad River Glen’s traditional kick-off to the ski season, there will be a special presentation at 4:30 pm at the entry to the Basebox prior to the traditional Shareholder’s Town Meeting. The idea of honoring Betsy Pratt with a plaque was the concept of the Mad River Homeowners Association and was wholeheartedly supported by the Mad River Glen Cooperative’s Board of trustees.