Can You Ski It? Yes You Can! 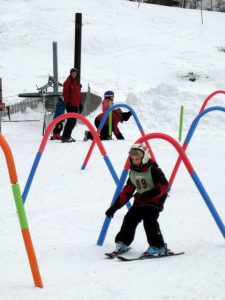 MRG: You Can Ski It, Yes You Can

The red and white stickers are unmistakable and world famous. There’s no slogan quite like “Ski It If You Can.”
So is this a challenge? A warning? A joke? An expression of pride?

Yes, yes, yes, and yes. I can say this with authority because I’m one of the fortunate people who learned to ski at Mad River as a child in the early 1980s. I never lived in the Valley, but spent every school vacation and then my college years in Vermont – and never skied anywhere else.

I never planned to give up downhill skiing, but between marrying a flatlander who had never skied himself, moving to Delaware and having kids, somehow getting on skis just never made it to the top of the priority list for about 16 years. But when my husband Matt and I decided that our young sons really ought to learn to ski, I knew our first experience as a family had to be at MRG.

I’ll confess that although I grew up skiing there, I was nervous about returning after a 16-year absence. But it turns out that my family is living proof that the slogan on the stickers is also an invitation:  Anyone can ski Mad River Glen. Not only was I able to start skiing there again after my long absence, but both my sons and Matt learned as well. This is no small feat, given that he was in his 40s when he did so. Even now, five years later, he’s not an aggressive skier (sorry honey) but he loves MRG just as much as the rest of us do.

Everyone Can Learn at Mad River Glen
The instructors who work at Mad River Glen tend to have done so for a long time. In fact, when I started skiing again at 39 I took a private lesson Leigh Clark – who also taught me the first time around when I was 11. Even the younger teachers often have grown up skiing at Mad River and have the knowledge of the mountain and the skills to prove it. The focus of every lesson is on helping you ski to the best of your ability, no matter what the conditions or terrain, and to make sure that you have fun doing it.

Kids programs at Mad River Glen are offered on weekends and during holidays and they are at their core all about teaching kids a healthy respect for the terrain while giving them the skills they need to ski all of it. Kids are grouped according to age and ability and there are no more than eight for each instructor. You can sign your child up for half- or full-day programs (choose the latter and lunch is included). It’s not a bad idea to make reservations in advance, especially if the conditions are good.

Private lessons are also available for kids and adults, and these are a great place to start if you are a beginning skier or feel intimidated by the terrain. There are also lots of great clinics for adults including women’s-only Saturdays, mogul-skiing lessons, and telemark clinics.

And you don’t have to take a lesson to learn at Mad River. The people who ski here regularly are among some of the best skiers you’ll ever see. I’m always watching and learning as I ride the lift or survey the trails. See someone doing something especially impressive? It’s small enough that you can probably find them later in the day and ask them for some tips. Mad River skiers love to talk about skiing, especially if there’s a delicious local beer involved.

Mad River is Heaven on a Mountain for Kids
There is something about the smaller size of Mad River Glen that seems to make kids feel at home there. On winter weekends when the kids programs are running it can seem like there are more children than adults on the mountain sometimes, and I know my boys love that.

And your kids don’t have to be expert skiers to enjoy Mad River Glen. Beginners don’t even have to ride a lift to enjoy the rope tow and gates at Callie’s Corner, where children can take gentle runs until they feel confident enough to try the main mountain. And the Birdland area (serviced by its own mid-mountain chairlift and small base lodge that are open on weekends and holidays) offers gentler, more groomed terrain that still has a few surprises in store.

You won’t find a lot of hot-dogging at Mad River or huge crowds, making it a safe place for older, more experienced kids to go off and ski on their own.  And the fact that all the trails meet at the bottom give even the younger kids the opportunity to do some exploration before rejoining the family.  The lifts also offer their own rites of passage – my boys couldn’t wait to ride the Sunnyside Double with no adults – so much more fun to them than all four of us on a quad. And every Mad River Glen child looks forward to his or her first solo ride on the Single Chair. Let the attendants know both so they can help but also to trumpet to the waiting line that a newbie is headed up the mountain solo for the first time.

And if you happen to have a child who isn’t too enthusiastic about skiing or who needs a break from it, be sure to check out the Naturalist programs. You can rent snowshoes for your whole family and take a guided tour to learn about the animals and trees. Got a younger child who is too little to ski? The Cricket Club Daycare is state licensed and has been run by Callie McAllister for four decades. When my younger son was learning to ski as a three-year-old he spent half his time in lessons and half at the daycare – and in all honesty, he preferred the latter.

Anyone Can Ski It
The terrain and snow at Mad River Glen are admittedly different from what you’ll find at other ski areas. Narrower, less groomed, and of course, natural. But there’s a challenge and simple beauty to the mountain that make it fun for skiers of all levels.  It is always fun to ski because it is always different.

My older son Tommy, who is now 13 but was 6 when he learned to ski, picked up on this spirit instantly, and before he even had a chance to put on his rented skis that very first day he wanted to know when he would get to ride the Single Chair to the top of the mountain. And after a day and a half of slogging up the rope tow and down the small hill at the bottom under the tutelage of the staff at the ski school, he was able to turn well enough through the gates that the teachers gave him the go-ahead if not to ride the single, at least to go up on the mountain.

Whereupon his grandmother, who has covered every inch of the mountain in her thirty-five years of skiing it, swooped in, took him up the Sunnyside Double Chair, and led him down to the bottom, just as she did with me when I was only a little older than he was. He never looked back to see if Matt and I were following. Later as we were riding up the chairlift, we saw the two of them, Tommy linking his turns, my stepmother urging him on, and the two of them cheering and hugging with the sheer pleasure of his success.

Sure, “Ski It If You Can” makes for a bit of machismo, even on the part of the kids who are there (as evidenced by the proud display of bumper stickers on their helmets). But the fact of the matter is that anyone can ski Mad River Glen – and if they do, they are sure to have a great time.

Mara Gorman is the daughter of Joan and the late Thom Gorman, MRG shareholders and owners of the Millbrook Inn, Waitsfield. She lives in Delaware and blogs about family travel at The Mother of all Trips and about Vermont skiing at All Mountain Mamas