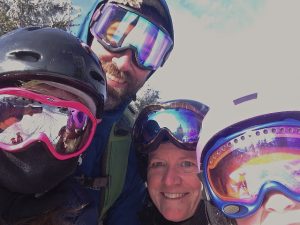 When my wife Kerry was pregnant with our first kid, I remember talking with my friend Dave, already the father of one, about getting ready for the baby. We were standing in The Single Chair line, where many an epic conversation has preceded many an epic run. I don’t remember what the conditions were like that day, but it was spring, the sun was blazing off the snow, and the corral was full.

A mustachioed guy in front of us turns around and chimes in. “First kid?” he asks.

“Then you’re definitely not ready,” he says smiling and turning back to his own conversation. Ah, the collective wisdom of The Single queue.

Of course every parent reading this knows how right the mustachioed guy was. We definitely weren’t ready for the trials and triumphs, the sleep deprivation and Lego wonders, the sloppy sink of happiness parenting would be. It’s true: I didn’t know jack.

But there was one thing I did know for sure: the kid’s sure as shootin’ gonna ski Mad River! I just had to fill in a few little details between the miracle of birth and the miracle of the first pair of skis… 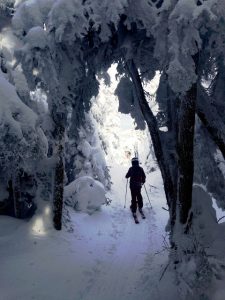 Now that we have two of them, 10 and 13 years old, I’ve had some time to be broken in. My youngest just went to her first middle school dance, and the oldest has already attended several political rallies — and I still don’t really know what I’m doing. So when I get lost, I stick to this mantra: we want our kids to be happy, healthy, and kind. No sweat, right?

At Mad River, or anywhere there’s people, there are opportunities for kindness. For one, we’ve tried to teach these girls to be courteous skiers, to look out for other people, and more importantly, to be concerned for others’ well-being. Good thing they have their mother for a better role model there! Even so, we’ve been lucky; they are generally kind people — as long as they’re not fighting each other.

As for happy and healthy, that’s one reason why we go to MRG as a family every week. Unless it’s 20 below, both kids are willing participants. When we’re out on the hill now, I can’t shake the 13 year old anymore. I’ll try to ski something fast, turn around expecting to have to wait for her, and bam! — there she is, right behind me, barely even out of breath. And her younger sister is close behind. If you’re a ski-parent, you know how awesome that is.

The kids relish the slopes, and they love the growing freedom they have to explore the mountain. They are psyched to meet up with their buddies and and to zip off into the woods — and I love that they love the woods.

“You’re at Mad River Glen; you’ll see ‘em again,” Dave likes to say. True for your kids as well. All trails lead to The Basebox (inbounds, anyhow). And when we’re all in there as a family, legs burning from a morning of skiing, sitting there in front of the big window and the big fireplace ablaze, chowing down on burgers and maybe sipping a Sunshine, I think to myself, I’ve totally made it. I’ve totally made it to the pinnacle of existence, a successful family ski day at The River. 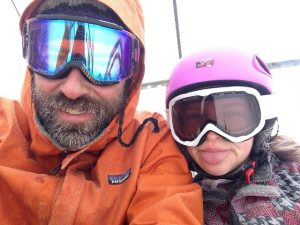 I think back on all of the little milestones: mastering the handle-tow at Callie’s; carrying their own skis in from the lot; first time down icy Chute bumps; first trip down the hill in a sled pulled by Patrolman Andrew… it’s amazing how far they’ve come. I know I’m not alone.

Just about any die-hard Mad River ski-parent knows that bringing up happy, healthy kids at MRG is among the greatest, most gratifying feelings a person can have.