The Magic of Bird Migration

The Magic of Bird Migration was presented by Brian “Warbler” Aust on December 27th, 2019.

The Magic Of Bird Migration 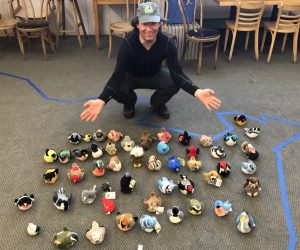 Theme:  Most birds that live on General Stark Mountain migrate thousands of miles a year using many special adaptations, all in search of seasonally available food sources.

The Magic of Bird Migration Program begins with all the Audubon bird dolls arranged to greet attendees. A volunteer from the audience is then called upon to count how many different birds there are represented. After taking inventory everyone takes a few minutes to check them out, squeeze them so they sing, and ask questions.

Birds that migrate are separated out from those that don’t, creating a proportion which is used to show what percentage of the local bird population migrates. Using the National Geographic maps, the mechanisms of how birds migrate are revealed to the crowd. There are many different indicators that birds use to migrate including a hormonal response to the angle of the sun in the spring versus the fall. They follow major landforms including coastlines, rivers and mountain ranges. The Earth’s magnetic field and the ability to follow an arrangement of stars.

Participants are then asked to choose a bird doll and are given a corresponding playing card. Using the ‘playing field,’ participants are then instructed to find their bird’s summer breeding range using the color-coded range map on the back of the playing card. Once participants have settled on a spot, they are then told to ‘migrate’ on the playing card to wherever their card shows that bird species’ wintering range. The playing field should at minimum show coastlines, but with preparation could also show the Appalachians, Rockies, the West Coast mountain ranges and the Mississippi River.